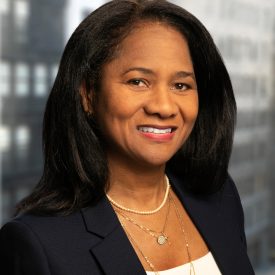 April Mosby, during 20+ years of Patent Prosecution and Appellate work, has prepared and prosecuted over 400 domestic and international patent applications.  She has drafted over 60 prevailing Appeal Briefs.

April brings an insider’s perspective to appellate patent work, having spent five years as a patent attorney working with Administrative Patent Judges at the Patent Trial and Appeal Board of the USPTO (PTAB).  During her PTAB tenure, she drafted over 500 Appellate Decisions.

Prior to joining MKW, and after 20 years as patent counsel at large companies, law firms, and the PTAB, April established an independent patent practice in 2017.  Her practice included Patent Prosecution as well as Trademark Prosecution and Appellate work before the Trademark Trial and Appeal Board (TTAB).

Before her patent career, April spent five years as a Member of the Technical Staff / Systems Engineer at AT&T Bell Labs.  As a Bell Labs Systems Engineer, she worked in various technology areas including hardware simulation, switching control systems, and computer security.  While at Bell Labs, she attended law school at night and became an IP District Manager focusing on Software, Telecommunications, and Standards Patent Licensing.