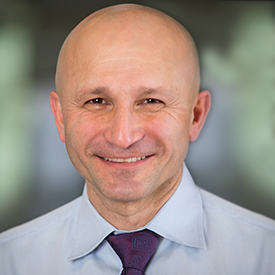 ARARAT KAPOUYTIAN, trained as an engineer in electrical, biomedical, and environmental engineering, has more than 20 years of experience as a patent attorney.  He has prepared and prosecuted many patent applications and analyzed patents (including large patent portfolios) for infringement and validity in various contexts. Ararat has also provided patent law and technical advice to litigation counsel in complex patent litigation matters and to technology transaction and corporate attorneys in due diligence and licensing projects.

Prior to this partnership, Ararat practiced patent law at the Technology and Intellectual Property group of Nixon Peabody in San Francisco. Before that, for six years, Ararat was an associate and of counsel in the Electronics, Software and Telecommunications group of Morrison & Foerster in San Francisco, where among other things, he trained and supervised junior patent associates. Previous to that, he was an associate at Coudert Brothers in San Francisco, where he worked on patent prosecution and litigation matters.