By now, most of us are familiar with the Wordle fairy tale.  As recounted in The New York Times and throughout the media, Josh Wardle created the game for his partner and released it in October 2021.  On November 1, 2021, ninety people were playing Wordle.  Almost two months later, that number was up to 300,000.  And, by the end of January 2022, millions were playing.  The New York Times Company then swooped in, purchasing Wordle for “an undisclosed price in the low seven figures.”

Becoming a millionaire was likely far from Josh Wardle’s mind when he developed his game—and it is evident that he wasn’t thinking about branding either.  But the New York Times clearly was.

The day after the acquisition, on February 1, 2022, The New York Times Company filed a use-based trademark for WORDLE, specifying a date of first use of November 2021 for the WORDLE mark in connection with providing a number of entertainment services in Class 41, including word games and word puzzles.

Trademarks differ from patents in that you don’t need to have invented the brand you are claiming as your own.  You only need to show that a consumer would not be confused as to the source of goods or services connected with the mark and the marks of others.

And so, as Wordle gained in popularity, a number of entities rushed to the Trademark Office to try and cash in on the Wordle phenomenon.  Even before The New York Times purchased Wordle, one entity filed for a trademark for WORDLE UNLIMITED, in connection with “downloadable computer and electronic game programs that may be accessed via the internet, smart phones, and wireless devices,” claiming to put the mark in commerce on January 10, 2022, with an app on the Google Play store.

Two other entities applied for “WORDLE” trademarks, on an intent-to-use basis (meaning they were not using the mark yet, but intended to use it in the future), prior to The New York Times’ acquisition:

The timing here was obviously not coincidental.

Then, within two weeks of the New York Times acquiring Wordle, there was a flurry of additional trademark activity, with three third-party trademark filings:  (1) WORDLE WITH FRIENDS in Class 29; (2) WORDLE! in Class 9; and (3) WORDLE in Class 28.

The Wordle mania continued last week, with a trademark filing on April 4, 2022, for “Purple Cow Magnetic Wordle” for magnetic games: 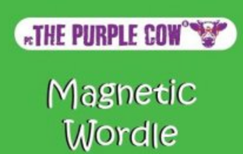 Of these marks, the most interesting is WORDLE!, filed on February 9, 2022, by Goldfinch Studios LLC.  This mark was filed as a use-based application, with Goldfinch specifying a date of first use for its WORDLE! trademark of April 24, 2016—more than five years before the current Wordle craze.  That likely means that none of the other trademark applicants, including The New York Times, can stop Goldfinch from using WORDLE! in connection with its daily word search puzzles.

Could it be that Goldfinch’s Wordle! was in use since 2016?  Goldfinch’s trademark application included a specimen from the Apple App Store, a portion of which is shown below, as proof of such use:

A look into the version history of the Wordle! app at the Apple App Store shows that this app was indeed created on April 24, 2016:

But would it surprise anyone that, after some “bug fixes” and tweaking of the app a few weeks after it went live, there were no modifications from 2016 until January 2022 as the Wordle craze was exploding?  Indeed, the version history for Wordle! shows that Goldfinch made no changes to its app from May 2016 through January 2022:

Then, on February 6, 2022, shortly after The New York Times Company’s acquisition, a new “6 Guesses” mode was added to Goldfinch’s Wordle! app—which should sound quite familiar to the millions playing Wordle every day:

The Goldfinch trademark application is directed towards “downloadable computer game software,” while The New York Times application is directed towards “an on line computer game.”  It therefore may be that the two games will be able to coexist in the marketplace (and on the Federal trademark register).  But it is noteworthy that The New York Times was willing to pay at least $1,000,000 for the word game when there were third parties with prior rights in the space.  (This assumes, of course, that The New York Times ran a clearance search in advance of the acquisition and learned about Goldfinch’s non-registered common law prior rights.)

Curiously, the marks cited above are not the first Wordle trademarks either.  There have been a number of abandoned “wordle”-type trademark applications and cancelled registrations over the years, including two WORDLES registrations from the early 1990s owned by The Time Inc. Magazine Company, which were let go in 1999.  This serves as a reminder that there is nothing wrong with the recycling of an abandoned brand.

At this stage, none of the trademark applications has yet been examined—the Trademark Office currently estimates a wait of approximately six months from filing before an Examiner reviews an application.  It will be very interesting to see what happens with all of the WORDLE marks as they begin to undergo examination.  While they are not all for exactly the same goods or services, reasonable arguments can certainly be made that the goods and services overlap and that there could be confusion between them.

The takeaway here is that if you think you have come up with a great concept, create your brand before you launch.  Make sure it is available—keeping in mind the possibility of non-registered third-party common law rights, the use of which you will not be able to stop, even if you manage to obtain a Federal trademark registration.  Once the trademark is cleared, get your application on file, covering goods and services you contemplate using (or expanding into over the next several years) as soon as possible.