Words Matter – Even in Design Patents

In Curver Luxembourg, SARL v. Home Expressions, Inc. (Fed. Cir. September 12, 2019), the Federal Circuit held that claim language can limit the scope of a design patent to a specific article of manufacture even where the patent’s drawing figures never depict that article.  In doing so, the court rejected the patentee Curver’s argument that patent coverage should be defined solely by the patent drawing figures, which showed an ornamental surface design disembodied from any article of manufacture.  After limiting the design patent’s scope to the article of manufacture mentioned in the claim, the Federal Circuit affirmed the grant of a Rule 12(b)(6) motion that dismissed Curver’s infringement claim. 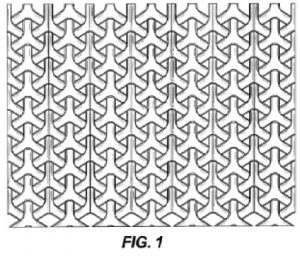 None of the figures illustrates the design being applied to a chair or to any other article of manufacture.  But the title, description of figures, and claim of the ’946 patent all consistently recite a “pattern for a chair.”

The term “chair” first appeared through an amendment during prosecution.  Curver originally applied for a patent directed to a pattern for “furniture,” not a chair specifically.  The original title was “FURNITURE (PART OF-),” the original claim recited a “design for a furniture part,” and each of the figures was described as illustrating a “design for a FURNITURE PART.”  None of the figures illustrated a chair, any furniture, or any furniture part.

The Patent Office allowed the claim but objected to the title, among other things.  The examiner stated that under 37 C.F.R. § 1.153 and the Patent Office’s Manual of Patent Examining Procedure (MPEP) § 1503(I), the title must designate a “particular article” for the design.  Under these provisions, the examiner found that the title’s use of “Part of” and the specification’s use of “Part” were “too vague” to constitute an article of manufacture.  To remedy this problem, the examiner suggested that the applicant amend the title to read “Pattern for a Chair,” and that “[f]or consistency,” the “title [] be amended throughout the application.”

Curver adopted the examiner’s suggestion.  It replaced the original title with “Pattern for a Chair,” and replaced “furniture part” with “pattern for a chair” in the claim and figure descriptions.  Curver did not amend the figures to illustrate a chair.  The examiner accepted these amendments and allowed the application.

Home Expressions makes and sells baskets that incorporate an overlapping “Y” design that is similar to the pattern disclosed in the ’946 patent, as shown below. 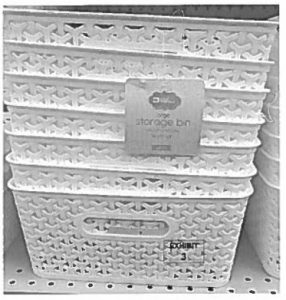 On appeal, Curver argued that in determining that the scope of its design patent was limited to a chair, the district court had improperly relied on claim language reciting a “pattern for a chair,” rather than focusing on the figures which are devoid of any chair illustrations.  According to the Federal Circuit, “Curver’s argument effectively collapses to a request for a patent on a surface ornamentation design per se.”  The court declined Curver’s request.

The Federal Circuit acknowledged that this was “a case of first impression.”  But the court stated that “our law has never sanctioned granting a design patent for a surface ornamentation in the abstract….”  To the contrary, the court emphasized that Supreme Court and CCPA precedents characterized design patents as protecting the application of the patented design to an article of manufacture.  Likewise, 35 U.S.C. § 171 only permits patent protection for a “new, original and ornamental design for an article of manufacture.”  The Federal Circuit also relied on the fact that “[f]or over one hundred years, the Patent Office has made clear that it does not grant patents for designs disembodied from an article of manufacture.”  The MPEP is in accord.  Given all of this statutory law, case precedent, and agency regulation – and given that Curver had amended the title, claim, and figure descriptions in its patent to clarify that the patented pattern was for a chair – the Federal Circuit concluded that the ’946 patent’s scope was limited by Curver’s amendments.

The Court of Appeals then affirmed the district’s court grant of Home Expressions’ motion to dismiss with ease.  Under the governing “ordinary observer” test, even Curver did “not dispute that the district court correctly dismissed Curver’s claim of infringement, for no ‘ordinary observer’ could be deceived into purchasing Home Expressions’ baskets believing they were same as the patterned chairs claimed in Curver’s patent.”

Even though the Federal Circuit typically focuses on the figures within a design patent when defining the patent’s scope, this was clearly a case in which the patentee’s words mattered.